Shobha invited a colleague of her’s to dinner. She requested him to order something he relished as she sat across the table.

They started their meal, Shobha felt her meal to be average and kept staring at her friend while he devoured his.

Towards the end of the conversation, she was more bothered by the fact that she allowed her friend to order what he enjoyed the most.

This was a constant pattern in Shobha’s life. While the sun could rise from the west, yet Shobha would always despise the happiness and growth of her colleague.

She would be on a constant lookout for vulnerabilities in her colleagues which she could exploit to make them feel bad.

She would constantly hunt for chances to mention what is wrong with the folks she did not like. One could always see the sparkle in her eyes as she would milk an opportunity to prove her upper hand.

If a colleague of hers would be sad, she would often ask, “What’s wrong with you?”. In most cases, it was she who had introduced the trouble.

She would never leave a stone unturned when it came to ensuring people’s failures.

The jealousy aspect of Shobha reflected in all parts of her life. Failure as a wife, as a mother, and as a working professional. Reason - all her energy and attention were focused on making others feel inferior.

The continuous envy of others’ success is the hallmark of professional jealousy. It’s something most go through, and it’s perfectly normal. It’s an emotion that rarely gets discussed for fear of coming out as petty or selfish if one were to admit to feeling envy of another person. It’s less difficult to fan the flames than to put an end to them. 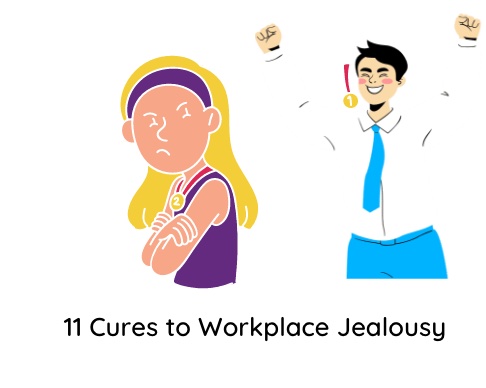 How to deal with it? In this article, we hear from a senior human resource professional and counsellor on dealing with it.

1. Remember that you will Die

I don’t say this to scare you, but accepting the fact that you will die will help you to minimize your bad days and maximize your good ones.

Accepting your mortality forces you to prioritize your goals and make better use of your time.

Because you have limited time, you should only concentrate on what you can control and regard everything else as something you must accept, such as the weather.

In a workplace scenario, you should concentrate on your career. Understand that you have limited time to waste on frivolous things like envy. Be happy for your peers’ growth.

You defeat envy and jealousy by realizing that those emotions serve no purpose for you and have nothing to do with the trigger, but rather with your insecurities in your own life.

You overcome envy and jealousy by focusing your attention inward to address your insecurities.

You are not envious of your friend’s career; rather, you are dissatisfied with your own.

You will die one day, so work on your personal goals and advance your career.

Several variables outside financial status may cause envy in the job.

It is simply a sense of pessimism, the notion that one has fulfilled his or her growth potential and would be better off elsewhere or in a new endeavor.

Either you have been in your current position for too long, or you have outgrown the company. However, in many instances, it’s because you’re tired of performing the same tasks over.

Taking on new challenges can prevent you from being bored at work and developing a poor self-perception.

Consider speaking with individuals from other divisions, having a discussion with your manager, and even discussing a possible job transfer with a coworker.

The majority of people are envious of others’ success, particularly the apparent ease with which some achieve it.

Suppose you and your friend both began as production assistants, but your friend was promoted and began earning more than you.

Consider what else could have helped them achieve before you complain about the unfairness of the world.

Perhaps she got the job because there was an opening and she was the most qualified candidate, or perhaps she spent more time at the office and was thus noticed.

Regardless of the circumstance, the most reliable approach for acquiring insight into success strategies is to conduct research into such methods.

This may sound obvious, but you’d be surprised at how many people would rather wallow in their misery than seek assistance.

But who can say?

Observing the solitude at the top may inspire you to be a more empathetic companion.

Instead of harboring resentment and jealousy at work, consider embracing your inner child and being more inquisitive.

Even though you have been in your current position for a while, you are not an expert in your sector.

Possessing the arrogant conviction that you know everything there is to know about your job is harmful because it may cause you to be envious of your coworkers who may have a novel or superior approaches to completing your duty.

Instead of opposing change, utilize the available current resources to develop your talents.

Recognize and acclimate to the fact that you now reside in an alternate universe.

You will discover that being useful makes your life overall more exciting.

One of the most straightforward ways to become less envious of other people’s work and success is to consider why you’ve remained in your position for so long.

It might be the relationships you’ve developed, the expertise you’ve acquired in your profession, or the impact you’ve had on the world.

Instead of getting envious of others, you should concentrate on your ideals and desired paths.

Traveling to exotic destinations or holding meetings in ritzy restaurants can be just as, if not more, satisfying than having genuinely wonderful staff.

Keep in mind that what you see on social media often represents only a small portion of actual events.

It is typically a mirror of what they want others to believe about them.

Remember that someone else’s achievement and happiness documented in a series of images does not and cannot diminish your own.

You should not wait for others to change before attempting to better yourself.

Get a grip on the situation, you should not wait for the other person’s behavior to change.

Changing one’s behavior may induce the other person to change theirs.

You should have a private conversation with a coworker whose persistent attempts at manipulation are impeding your job or the collective’s progress toward its objectives.

Consider the other person’s feelings when presenting the facts. Your objective should be to confront this person in a positive and non-humiliating manner.

If this doesn’t help, it’s time to speak to your manager.

A manipulative coworker can negatively affect your professional and personal life, according to behavioral scientists.

To prevent becoming a victim, simply deny their solicitations respectfully.

Numerous other conditions must be met to ensure that your message is heard clearly.

Maintain some distance from the abusive coworker. Avoiding a manipulative coworker is one approach to dealing with them.

Rest as often as possible, and do not wait too long between rests. Keep yourself so occupied that no one has the time to bother you with a stupid request or an odd notion.

If you overreact, the other person may have more grounds to distrust your honesty. Someone in a position of authority may learn that you lost your temper.

You can relax and appreciate the afternoon wind. If your place of employment has a gym, it’s a good idea to do some exercise during lunch.

Taking a step back from a difficult situation can help you evaluate the issue and devise a more effective solution.

Do something useful about persistently envious employees. If you are interested in expanding your career and getting additional experience, discuss professional development options with your boss.

If you wish to move to a new department or assume responsibility for a new project, now is the time to begin working toward those aims. Concentrating on what you can control will decrease your envy of others.

Envy is ingrained in humans, but if left unchecked, it can ruin your professional success. It is necessary to continually focus on your personal experience.

At the end of each day, reflect on how you assisted others or contributed to something positive.

If you feel someone would benefit from reading it, please do share.

Quitting, the only Option »