From Fury to Failure: The importance of Addressing Anger Issues

Once upon a time, in a grand estate nestled in the countryside, lived a couple, Samantha and Sab.

Samantha was a fierce force of nature, with a burning ambition that constantly drove her to the next milestone. But, this intense desire for control manifested in a fiery temper that often erupted like a volcano, leaving destruction in its wake.

One day, Samantha decided to chop off her long locks in a bid to try something new and add a touch of sophistication to her appearance.

“My dear, I must say, I don’t quite understand your sudden desire to chop off your lovely locks,” said Sab.

“I am tired of being seen as a mere ornament, a possession to be displayed and admired. I want to express myself, to be seen as an individual,” replied Samantha, her voice laced with a hint of arrogance.

He tried to reason with her, “But my dear, your hair is one of your most striking features, and cutting it short may not be the best way to express yourself.”

Her anger flared up like a volcano, “I will not be held back by your narrow views of how I should look. I will do as I please,” she retorted, her eyes flashing with defiance.

She walked into the salon with a vision of her desired appearance, but as soon as she stepped out, she knew that things had gone wrong. Her once lush mane was now choppy and uneven, like a field of wildflowers trampled by a herd of elephants.

Samantha immediately called her husband Sab, and as soon as he saw her, he could sense the storm brewing within her. He tried to reassure her and tell her that hair grows back and that it was not a big deal, but his reassurances were like droplets on a raging inferno, barely making a dent in her rage.

“How could you let me leave the salon looking like this? You should have stopped me! I look like a complete disaster,” Samantha exclaimed on reaching home, her voice rising with each word like a crescendo in a symphony of anger.

He said, “Samantha, I know you’re upset about the haircut, but you need to understand that it’s not the end of the world. It’s just hair; it will grow back.”

Sab tried to soothe her, but her temper was like a tempest, impossible to tame. She continued to berate him and blame him for her terrible haircut. Sab felt as though he were constantly tiptoeing around Samantha, never knowing what would incite her next outburst. 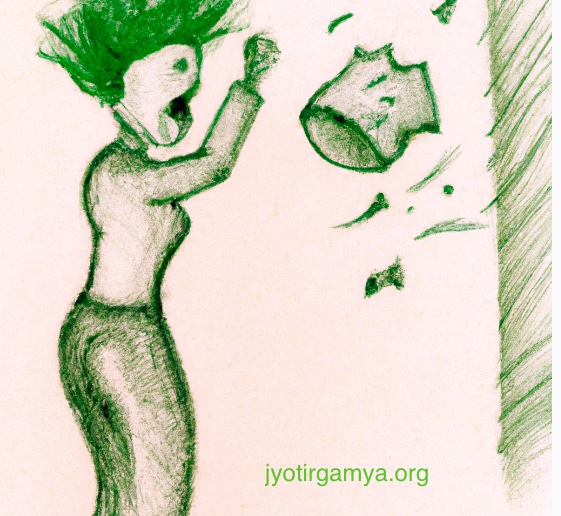 “Your constant anger and need for control are like a sword hanging over our relationship, always ready to strike. We need to discuss it and find a way to work on it.”

Samantha was taken aback by Sab’s words; it was like a mirror held up to her face, reflecting the ugly truth. She realised that her anger had been causing problems not only in her relationship with Sab but also in her other relationships and career.

As the years passed, their marriage was tested by this recurring issue, and her adamant choices, including her short hair, seemed to be the spark that ignited Samantha’s fury.

As the chasm between them grew wider, like a Grand Canyon, the love they once shared began to fade, like a flower withering without water. Sab, feeling defeated and unappreciated, ultimately decided to end their marriage.

“I am sorry, my dear, but I can no longer tolerate your constant anger and refusal to see things from my perspective,” said Sab, his voice heavy with sadness.

Samantha was left alone, like a ship lost at sea, with no compass to guide her. She realised that her constant anger and need for control had caused her to lose the one person who truly loved her. She was filled with regret, like a bird with a broken wing, unable to fly.

On the other hand, Sab felt a sense of liberation and relief. He knew it was the right decision for him, and he was looking forward to starting a new chapter in his life.

Samantha had a distasteful ending; well, only if she had learnt to listen to people.

The Good news is you can stop being Samantha; our experts have some actionable advice to offer.

“Before sharing my approach to anger management, it is important to note that the goal of anger management- is to reduce both your emotional feelings and the physiological arousal that anger causes. I see anger as neither positive nor negative but rather as an “energy” that we can transform and harvest towards positive ends!

There are three main ways to cope with your anger: expressing it, suppressing it, and calming it and expressing your anger in an assertive manner that clarifies your needs and how to get them met without hurting others is the healthiest way to express anger. Anger can also be suppressed and then converted or redirected by holding it in by thinking about other things and focusing on something positive, and working to turn it into more constructive ends, such as accomplishing and achieving goals and striving for success. Finally, you can control your internal responses to anger by lowering your heart rate, calming yourself, and letting the feeling go away.

Simple relaxation tools, such as deep breathing and relaxing imagery, can help calm angry feelings. In addition, some books and courses can teach relaxation techniques you can use in any situation. Other strategies include changing your perspective and reframing angering situations, such as Cognitive Restructuring.

Problem-Solving to try to address the unmet needs identified by the anger.

Improving communication to address issues in relationships that can lead to anger.

Using humour to diffuse both internal and external tension in potentially angering situations.

Changing your environment to one that inspires calmness and happiness for you (It’s hard to be angry in a garden, but very easy to be angry in the middle of a bustling City or Traffic Jam!).

Lastly, suppose you feel your anger is out of control, and it’s taking a toll on your relationships (including with yourself) and essential parts of your life. In that case, you might consider counselling to learn how to handle it better.”

“Anger is a human emotion at the centre of all experiences preoccupying us from the ancient wisdom traditions of both the East and West. To contemplate anger, and its related concept Ahimsa, is to embark on an honour, perhaps from inner to outer Self, and within and across all our cultures and systems of meaning-making.

There is no single way to manage it but to sit with it inside and outside and observe as it arises and changes across individuals, groups, and nations are to re-acquaint oneself with one manifold nature, a journey that begins with the single step of acknowledgement.

Beginning here, one can feel, think, and act into awareness, education, and a mental health concept that is comprehensive, economical, and modest enough to serve all needs in their time.

“As human beings, we have evolved over an extended period from primates to our current existential form. Throughout this evolution, we left a few things back and carried a few from our natural ancestors. Emotions are one of the things that we have brought forward through generations. Our ability to control and express our feelings appropriately according to the situation around us is what we cultivate through civilisation. Still, emotions like anger, if not controlled, can lead individuals to complicated problems in their personal, social, and professional lives.

So here are a few tips for managing anger issues:

“When it comes to anger management, it’s not just the single emotion of ‘anger’ that we are talking about, but a lot of emotions hidden beneath it. Anger is usually just the response that is visible on the surface.

While reflecting on the situation that made you angry, think about how you felt when that happened. Were you hurt, sad, disappointed etc., that eventually turned into anger? Understanding the actual emotions playing their part in a conversation changes how you communicate, and anger finally takes a back seat.

Don’t jump to conclusions or assumptions during a heated-up conversation. We often tend to make our meanings out of conversations and believe them like it’s a fact, but more often than not, you’ll find it to be a mere assumption so strong that it starts driving how you think and feel about something or someone. Is this factual information I’m sure of, or am I assuming this based on XYZ factors?”

If you like what we are doing, do spread the word.